The methods used in this piece are as follows:

A Right triangle is a very common type of two-dimensional figure used in the field of geometry. It is a type of a triangle which has one angle equal to 90 degrees. 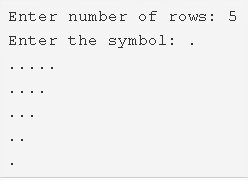 Firstly, as per the given example, you need to clear the number of rows of the pattern to be printed.

The number of rows stipulated for this pattern in the example is 5.

The symbol ‘*’ is chosen to print the Inverted Right Triangle Star Pattern.

Hence, the pattern is printed consequently as per the code.

Thus, the manifold ways to do the same in C programming are as follows:

2) The outer for loop iterates through rows with the structure for(i=n;i>0;i–).

3) The inner for loop iterates through columns with the structure for(j=0;j<i;j++).

The loop prints the symbol which is entered by the user.i.e each row contains i symbols.

4) Cursor comes to next line after each row(go to step 2).

2) The inner while loop iterates through columns until the condition j<i becomes false.

3) Cursor comes to next line. i value decreased by 1.

3) Cursor comes to next line.i value decreased by1.