The methods used to do so are as follows:

As we all know, a rhombus is a 2-dimensional quadrilateral figure whose sides are all equal in nature. The opposite sides of a rhombus are parallel as well. 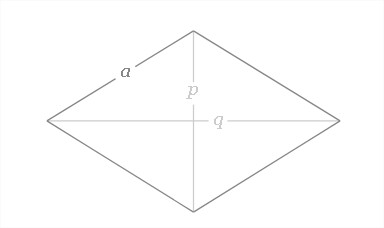 Thus, the perimeter of a rhombus = 4a.

The multitude of methods with which the perimeter of a rhombus can be calculated in C Programming is as follows:

1)p=perimeter(s) using this code we are calling the perimeter function.

1)We are passing the addresses of s,p variables using perimerer(&s,&p) function.

2)void perimeter(float *s, float *p) retrieve  the values at  that addresses and calculate the perimeter value

3)The perimeter value will be stored into pointer variable *p

2)area(s) replaced with that expression given at #define.

C
If you do have any doubts, then just leave a comment here.
Writer - MK
Previous: C Program To Calculate Perimeter Of Rectangle | C Programs
Next: Find Missing Third Angle in Triangle : Java Program