in Java Programs January 24, 2023 Comments Off on Java Program to Calculate Hypotenuse Of Triangle | Programs

Suitable examples and sample programs have been included in order to make you understand simply.

The methods discussed in this article are as follows:

The side which is opposite to that of the right angle is known as the hypotenuse. 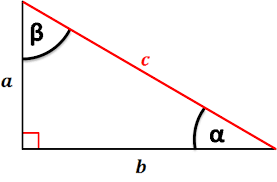 As you can see, the side c is opposite to the right angle. Hence, c is the hypotenuse of this triangle. According to the Pythagoras theorem,

Thus, the multiple ways to calculate the hypotenuse of a right triangle in Java programming are as follows:

Calculating the hypotenuse of a triangle is very simple. To do this, we’ll need the length of two side (adjacent and opposite). This value can be assigned to the variable in the code itself. After getting the inputs, hypotenuse can be calculated as square-root of sum of square both the sides.

To find the square-root we can make use of the predefined method sqrt() from the Math package as follows:

This resultant hypotenuse can then be displayed on our output console screen.

In the previous method, the inputs were given in the code itself. So, for a different set of inputs, the change must be made in the code which is not very convenient.

Instead of that, we can give inputs as command line arguments for the code.

Here, while giving the run command, after the name of code to be run, the same number of arguments can be passed as required in the input with space between each of them.

These inputs are of string type and need to be converted into double type by parsing them as follows:

After gathering inputs, the same calculation as in the previous method is to be made to get out resultant hypotenuse.

So, we read the lengths of two sides of the triangle with Scanner class as follows:

Hypotenuse is nothing but the square-root of sum of square of the two sides by Pythagoras theorem. It can be calculated by making use of sqrt() method of the Math package as follows:

Static method can be made use of in this problem so that, the main logic of the code for calculating the length of hypotenuse can be made reusable.

By doing so, in future if somewhere else in the code, we would like to make use of the same logic we can just do by calling this method instead of rewriting the statements.

Here, main method reads the length of two sides as input with the help of Scanner class. Then, another static method (hypoCal) is called and the inputs gathered is passed as parameters.

This static method (hypoCal), calculates the length of hypotenuse by making use of both sqrt() and pow() method from the Math package as follows:

This value is returned by the static method(hypoCal) which is our resultant output.