Java Program To Calculate Salary Of An Employee | 3 Ways

Java Program To Calculate Salary of An Employee – In this article, we will detail in on all the methods used to calculate the net salary of an employee in Java Code.  Suitable examples and sample programs have been included in order to make you understand simply. Employee program in Java.

Net Salary, as we all know, is the amount of money that an employee takes home after having all of the deductions cleared and finished at the end of a month.

Usually, people have a few deductions going on with their gross salaries. 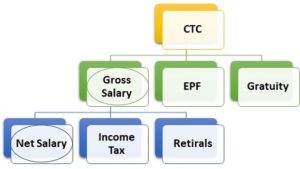 As you can see in the image, CTC or Cost To Company is the price that a company is spending on you. Out of that, come out several branches. Deducting one after the other we land at the Net Salary.

The formula for Net Salary is as follows:

Thus, at the end of the day, the salary in-hand is not exactly what you work for in your workplace.

Hence, the various methods to calculate the net salary in Java Programming are as follows:

The easiest way to find the net salary of employee is by first taking the values of gross salary, income tax, provident fund and professional tax in the main function and directly use the below formula.

This is a simple arithmetic calculation that will give you your desired result i.e., the net salary or salary-in-hand. This can then be printed in the console screen.

In the above scenario, we had seen that the values have already been given in the code itself and if one were to change these values they have to go and make changes in the code.

This is not very convenient at a user’s perspective.

So to read the input, we use the Scanner Class. The inputs for this program are gross salary (gs), income tax (it), professional tax (pt) and public provident fund (pf).

So using this, we read the input at run time after which the same calculations are performed.

A small difference here is the income tax, public provident fund and professional tax are taken as percentage of gross salary in the input. So first, the amount is calculated using

Amount=Percentage*GrossSalary/100 and then the below formula is used.

This is a simple arithmetic calculation that will give you your desired result i.e., the net salary or salary-in-hand. This can then be printed in the console screen.

write a java program that computes the pay for an employee who works by the hour.
Java

Static method is a method in Java which are referenced with the class name itself and do not require separate object to reference it.

For the given problem, static method can be used as a block which will be consisting of the main logic used to derive at the net salary of the employee.

This is the block where the same logic used in the example of Scanner Class is used with the same arithmetic operation to be performed.

This static class named ‘salary’ is then called in the main class. As it can be observed that, the return type of static method is double which is precisely the same as that of our desired net salary.

This method first finds the exact amount of income tax, professional tax and provident fund. After obtaining these, it finds the net salary using

Command line arguments are where we can give input in the form of argument in the command prompt itself while running the java code.

We can directly the values as arguments in command line while running the code with space in between.

After getting the input, the same operations as above are performed to arrive at our desired result i.e., net salary.