Suitable examples and sample programs have been included in order to make you understand simply. 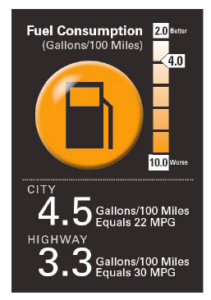 Miles per Gallon is considered to be the average mileage of a motor vehicle which uses Petrol or Diesel as fuel. Miles represents the distance the vehicle travelled in the units of Miles.

1 Gallon is a measure of the fuel used. To convert 1 Gallon into the much more normally used SI units,

Hence, the lower the gallons of fuel is consumed, the better is its mileage.

Thus, the various methods to calculate Miles per Gallon in Java Programming are as follows:

In this method, the entire logic along with the input output operations is written in the main method of the Java Class.

For any problem, the first step is to take inputs as desired followed by the necessary steps to be taken and operations to be performed to arrive at the output.

In our present problem, we require two inputs- Miles traveled (miles) of the decimal type therefore, we make use of double and Gallons (gallons) which is also of type double. After getting the input by making use of scanner class, we make use of the following formula:

This is the desired output which is also of type double which can be displayed on our output screen.

Just like making use of scanner class in the above example, there is another possibility to take inputs at run time. This is by making use of command line arguments.

While taking inputs, since our first input is in km format whereas we require it in miles, conversion is to be made. Th formula used for conversion is:

Now, with all the requirements in hand, the calculation is to be performed using the formula

Mileage = Miles/Gallons, which is the desired output.

In both the above examples, it is observed that, the entire code has been written in the main method itself which is not efficient when considering the readability factor. Hence, in order to make the readability better, it is advisable to split up the code based on its logic.

In the current problem, the main method can contain all the input output operations and call another static method (distance).

This is then returned to the main method in which the output operations will be performed to display on the output screen.

When everything is written in a single class and a code is lengthy, it becomes a hideous task to find the portion of code we would like to view.

To make this approach easier, it is better to split the code into different classes based on their logic and functionality.

In this problem, we can split the code into two portions or classes.

One class consisting of the main method which takes care of reading the inputs (km and g). The main method then creates an object referencing the other class (MgpCal).

When object is created, the constructor in that class gets executed. This constructor consists of statements to perform operations to find the miles per gallon.

First it converts kilometres to miles and then finds the mileage (miles/gallons).

This is stored in a variable of class MgpCal which is printed in the main method using the object created for this class and thereby calling the variable with that object. This is round figured using round method of the Math package and printed.