Proper examples and sample programs have been added so that people can grasp the logic and meaning behind the said codes in java programming.

The many methods used to decipher the perimeter of a circle in this piece are as follows:

As it is clearly known, a circle is the collection of infinite points which form a locus equidistant from a single point. The locus is known as the circumference of the circle. 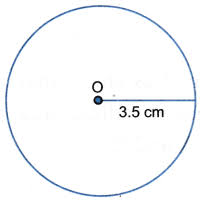 As you can see, this is a circle with a radius of 3.5cm. Also, the line which passes through the centre of a circle and connects the circumference on both sides of the circle is said to be the diameter of the circle.

The ratio between to the Circumference of a circle and the Diameter is always equal to Pi (22/7).

Hence, the Circumference of the above circle is as follows:

Thus, the multitude of means to calculate the circumference of a circle in Java programming is as follows: